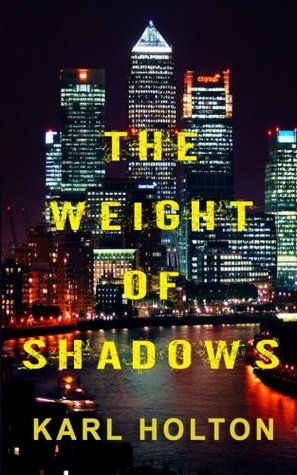 When you have spent your life in the shadows, what would you do at the dying of the light?
Three years ago the best murder detective in London is blamed for the death of his colleague and kicked out of the Met.
A man with secrets buried in the past and present returns to London, the city that started the mysterious career which made him a billionaire.
The two need each other.
But they have no idea how much.
A gripping crime thriller mystery with twists from the beginning to end.

The weight of Shadow was a crime thriller mystery first of the series that revolved around best crime detective of London- Danny Benedict and a billionaire with mysterious career- Ray Hanson. It was story of these two main characters, both in different career but had shadowy past and working their way to light but shadows of the past don’t leave that easily. Circumstances put them in desperate need of each other. This was kind of book that you can pick blindly and will enjoy even more without any prior thoughts.

Ok a little warning first- murders in book were so damn brutal, freaking horrific, gory, and heartless. They are not overly graphic but enough to imagine it to that level.

Characters were mind-blowing, creative, developed, and perfectly written. I can’t possibly tell all about characters but let just say I liked the way author represented them all especially main characters and the team they worked with.

Most interesting characters to read in the book were-

Benedict- DCI working at OCC (Organised Crime Command) a part of NCA for last two years. Before the incident with death of his colleague he was in Met. He was pretty known effective murder detective,  amusing, interesting, smart and that’s why most hated in departments he worked. His skills were impressive and amazing.

Ray- had history with gangs and was into money laundering business in past, but now was working for good and legally but there was mystery to it, no one has much information about him and what he does only that he had connection to highest level.

Paddy- bodyguard of Ray, who worked with him for 20 years and so was more like close friend. He was fiercely protective and also a great person.

Pip- previously worked at Interpol who still had a secure access to Interpol and many other agencies. She was funny, charming and highly skilled in her work. I enjoyed all the chapters she was mentioned in. She was one strong interesting character that i would love to know more.

Wallace- DI at Flying Squad. She and her team were quick to act. Her skill were almost equal to Benedict. They both made a great team in solving robbery and murder mystery.

Even the antagonists were intriguing. They made the book more interesting, chilling and thrilling to read.

First half of the book introduces so many characters including main characters Danny Benedict and Ray Hanson, their past life narrated in bits but gave pretty good picture of their life till now, their skill in their career, and their relation with the other secondary characters they were working with. Secondary characters working in NCA, MI5, MI6, CIA, Met, Flying Squad as well as various gangs and their leader, murderers, robbers were described so amazingly that I never felt anywhere getting confused because of extensive and yet very important cast of characters. It made reading little slow initially because I couldn’t get any idea where it was going but mainly it was because of narration of different scenes occurring on same day alternatively. Three or four different scenes were narrated in third person voice chapter wise till almost 40% of the book and then eventually everything merged into such fine thriller.

Second of the book was more clear, more exciting and action packed where I got all the answers, mystery solved, and complexity of the whole story eventually became simple, in short all the scenes merged so nicely by the climax. Author made me hooked to book till the end. Though you might get idea at around climax that where story is heading and how it will end, there were pretty good surprises and twists that made the climax and end so thrilling and unpredictable. There was bit of philosophy in this half and also that first line of blurb and characters’ thought on that were interesting to read.

End was shockingly turned out a cliffhanger. Till that very last line I couldn’t imagine there was any possibility of cliffhanger. So those who are in habit of reading last line of the book first, please don’t do it. There are still few questions left unanswered and some mystery unsolved for the next book of the series. I’m definitely looking forward to read it. If it’s made into movie, it will be awesome.

Overall, it was fast paced, chilling and thrilling crime mystery with large but interesting cast that all mystery-thriller lovers would love to read it.

*** Note: I received review copy of this book from the author, in exchange for an honest review. Many thanks to author for giving me a chance to read this book. ***